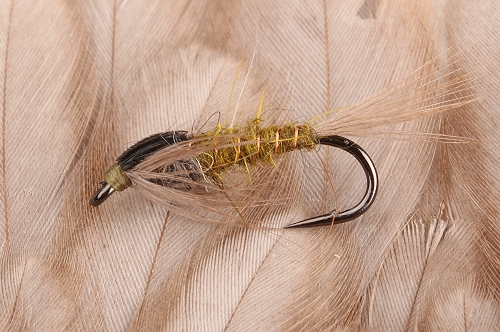 How to Fly Tie a Mayfly Nymph –

Use copper wire to make a nice underbody for the thorax, making a cigarr shaped thorax. This will also add some weight to the nymph

Set the thread and cover the copper to secure it and keep it in place. Move the thread to the bend of the hook.

Strip off a bundle of fibres from a dun hen hackle. Make sure they are even and tie on top of the shank, just in front of the bend. Tie down the waste ends.

Cut off a piece of copper wire and tie in beside the tail.

Dub the thread with olive hare’s ear fur. Don’t take too much dubbing, as we want a slender abdomen. Make a nice back half of the shank and taper the abdomen towards the middle of the shank.

Take the wire and and wind it the opposite way as the body was dubbed. Make 3-4 even turn and tie in. Secure and dut off the waste.

Cut out a section of black pheasant tail fibres. Tie in on top of the shank, just in front of the abdomen and cut off the waste ends.

Dub the thread with some dun hare’s ear dub and make nice even thorax. The thorax can slim off towards the hook eye. Make sure to leave enough space for the hackle and head.

Choose a nice dun hen hackle. Make sure the fibres reach the hook point or barb. Tie in the hackle in the tip and cut off the waste.

Pull the pheasant tail fibres over the thorax and tie in in front of the hackle. Cut off the waste ends.

Make a small, neat head with the thread and finish with a whipfinish and cut off the thread.

Pictures of the finished nymph

Back and bigger than ever!!

Item added to your cart

Continue Shopping Go To The Cart